DPF (Diesel Particulate Filter) is a device designed to remove diesel particles or soot from the exhaust gas of a diesel engine. It basically traps the diesel particles in the filter and at a given condition the ECU will put it into regeneration mode when these particles are burnt and blown out of the exhaust. Unfortunately these filters get blocked by constant urban cycles which may cause running problems. The engine will enter in “limp mode” and the warning MIL will be displayed on the dash panel. 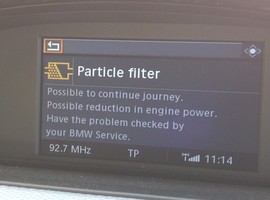 A diesel particulate filter (commonly referred to as a DPF) is a device that helps to reduce the emissions from your diesel engine by collecting soot particulates from the exhaust gasses before they enter the atmosphere. The exhaust gasses flow into the Diesel Particulate Filter and the soot particles from the gasses are filtered out and trapped within the DPF and later burned away during the regeneration process.

Why Do Cars Have DPF's?

With changes to the car emissions legislation, diesel particulate filters are required for vehicles to reach the Euro 4 & Euro 5 emissions standards.

How Does a Diesel Particulate Work or DPF Work?

Unlike a Catalytic Converter a DPF is not a flow through device. The channels of the filter are blocked at alternate ends meaning the gasses are forced to flow through the cell walls in order to exit the filter. As the cell walls are porous, the gasses are allowed to pass through, but the particulate matter is held. This ensures that only the clean exhaust gasses can exit, and the particulate matter is trapped in the filter.

Passive regeneration takes place automatically on motorway-type runs when the exhaust temperature is high. Many cars don't get this sort of use though so manufacturers have to design-in 'active' regeneration where the engine management computer (ECU) takes control of the process.

Active Regeneration occurs when the level of soot in the filter reaches around 45%. The ECU makes small adjustments to the fuel injection timing and increases the exhaust gas temperature. This increases the exhaust temperature which then initiates the regeneration process, burning away the soot trapped in the DPF. If the journey is a bit stop/start the regeneration may not complete and the warning light will come on to show that the filter is partially blocked.

It should be possible to start a complete regeneration and clear the warning light by driving for 20 minutes or so at speeds greater than 40mph.

If you ignore the warning light and keep driving in a relatively slow, stop/start pattern the soot loading will continue to build up until around 75% when you can expect to see other dashboard warning lights come on too. At this point driving at speed alone will not be enough and you will have to take the car to a dealer for a forced regeneration.

If you continue to ignore warnings and the soot loading keeps increasing then the most likely outcome will be that you will have to get a the DPF replaced.

Before the Latest Government announcement (9/12/13 ) There was the option to have the DPF filter removed. This service can no longer be offered due to current legal issues.

Removal is not a legal option

It is suggested from time to time that the answer to a failed DPF regeneration is get the DPF removed from the exhaust system rather than pay to get it repaired/renewed.  Indeed there are companies advertising just such a service including reprogramming of the engine management software, but is it legal?

According to the Department for Transport, it is an offence under the Road vehicles (Construction and Use) Regulations (Regulation 61a(3)) to use a vehicle which has been modified in such a way that it no longer complies with the air pollutant emissions standards it was designed to meet. Removal of a DPF will almost invariably contravene these requirements, making the vehicle illegal for road use.

Also from Feb 2014 , The DPF filter is Part of the current MOT / VOSA annual test.

Legal requirements and the MoT test

MoT test will include a check for the presence of a DPF. A missing DPF, where one

was fitted when the vehicle was built, will result in an MoT failure.

A vehicle might still pass the MoT visible smoke emissions test, which is primarily

intended to identify vehicles that are in a very poor state of repair, whilst emitting 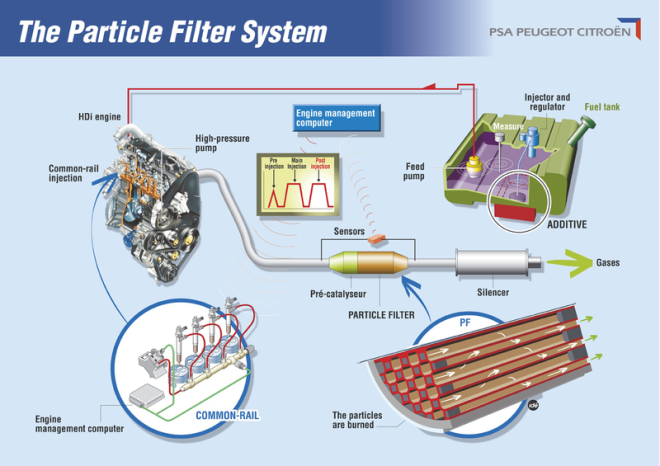